I lost an object in an RER station..

If you have forgotten an item in an RER station, you can use our online service to report the loss of your item.
To report a lost item : click here. 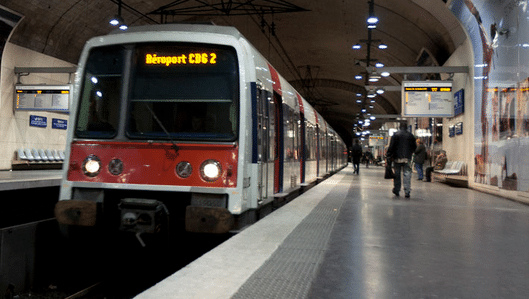 The different lines of RER

You are in Paris and you desire to move in the city, this part of the article proposes to help you to move easily by presenting you the various lines of the RER (Regional Express Network).
The RER is a network jointly exploited by RATP and SNCF.

There are 5 main RER lines

– Line B of the RER forms one of the North-South axis which serves 7 corresponding stations in Paris.
This line corresponds with all the other lines of the RER. It is composed of 47 stations and 4 branches:
• B2 Robinson (RATP)
• B3 Aéroport Charles de Gaulle 2 TGV (SNCF)
• B4 Saint Rémy lès Chevreuse (RATP)
• B5 Mitry-Claye (SNCF)

– Line D of the RER also fully exploited by the SNCF.
It is the only line that gives direct access to the North train station and the Lyon train station.
It has 3 branches, 49 stations including 3 in Paris:
• D1 Orry-la-Ville Coye
• D2 Melun
• D4 Malesherbes

The RATP group, located in 14 countries on four continents, is the world’s fifth largest urban public transport group.
It operates a part of public transport in Paris: the sixteen Paris metro lines, eight of the ten lines of the Ile-de-France tramway (T1, T2, T3a, T3b, T5, T6, T7 and T8), part of the Île-de-France bus lines, and part of the A and B lines of the Île-de-France regional express network (RER).
In the Paris region, it carries more than 3.3 billion passengers a year (2016)

You are on a page of the Lostanfound-paris.com website
This site offers its visitors independent information.
In this article two brands are mentioned: RATP & SNCF
These brands are registered trademarks.
This site is not a partner, associate or affiliated with the RATP & SNCF brands and also the RATP group.